Festival Plaza is well situated along Lincoln Highway in Edison, NJ, a 32-square mile well-diversed township of more than 102,000
residents.

• In 2016, Money Magazine ranked Edison as the 19th best place to live in The United States because of its close proximity to New York City, Philadelphia, and
the Jersey Shore. Edison ranked 5th in the best places to live in terms of diversity. Mayor Thomas Lankey has said “one of Edison’s most distinguishing features is its ethnic, cultural and religious diversity, a diversity we embrace and enjoy. The professional offices, specialty stores, restaurants and other businesses owned and operated by this diverse group of people have strengthened our local economy.”

• In 2010 Edison was ranked as one of “America’s 10 Best Places to Grow Up” by US News & World Report which focused on low crime, strong schools, green spaces, and an abundance of recreational activities.

• Highly-educated population surrounding the center with over 44% having attained a college degree within 5 miles of the center.

TESTIMONIALS WE MAKE OUR VISITORS HAPPY

Contessa Nowacki
19:57 12 Dec 22
Beautiful shopping mall full of Korean stores and restaurants must go if you haven't been there.

S T
05:19 02 Dec 22
Great place for eateries and Asian supermarket. The area is always crowded so you'll most likely have to do a few... circles if you are there during peak times.read more

grace woo
14:49 17 Nov 22
A busy shopping plaza with HMart there. I was not so impressed with the service in Paris Baguette there. One of the... cashiers couldn't even properly pack buns and pastries I bought, very annoyed.read more

B C
22:59 03 Nov 22
Food options here is plenty. Hmart provide quality groceries. This plaza is popular that parking is hard to find most... of the time.read more

Hank Chang
12:03 21 Oct 22
Hmart, bbq, spa, hot pot, desserts and more - the only complaint is the terrible parking situation. Far too crowded on... the weekends and many weeknights. New building up and no tenants yet there. They need to open that parking up.read more

Koki Sato
21:16 12 Jun 22
Excellent place for shopping. It's a complete hypermarket where you can find everything you need. Clean and fresh. A... place that I always come to shopping. Strongly recommended.read more

James Kim
11:20 14 May 22
Great place to get all the Asian groceries. Plus they have the cleanest seafood section I've seen around. Meat section... is great but the beef prices here are lot higher than most places. The meat and poultry are packaged neatly and very clean. Definitely not your local grocery store. You might pay little more but Definitely worth it.read more

Sasha B.
20:56 27 Apr 22
This area has many resturants to just enjoy. One end of the plaza even has a spa to relax and enjoy yourself while the... other side has all the food you can choose to eat at.read more

Sid Da kid
22:30 27 Mar 22
Great place for Asian food shopping, lots of places to eat here from hot pot to tofu pots, korean bbq, fried chicken,... hard to get parking, they should add more parking on the 2 grass areas. Now they are building more shops with dual floor by the grass area which will compund the parking issue, will definitely not get any parking now..parking will now spill over into the side streets unto peoples housesread more

Lauren McConnell
21:38 11 Feb 22
Elegant facility, well-kept, and lots of amenities. An excellent experience for the price. I loved the deep tissue... massage.read more

Bakhtiyar Karimov
12:30 21 Dec 21
South Korean/S. Asian supermarket. Huge assortment of food, great selection of household goods, very much different... from regular American supermarket. I particularly like their selection of mushrooms and fruits. In spring they sell Korean cucumber plants that I like planting in my garden.read more

Franklin Edelstein
14:03 18 Jun 21
This is an Asian far-east plaza with lots of good restaurants. It also has a large Asian supermarket which has a food... court as well. There is a bank and a great pastry and cafe which you can enjoy. Try one of the buffetsread more

Changsoo Kim
01:59 21 May 21
Good location, h mart is one of favorite Asian market, this mall has Paris baguette bakery and lots of restaurants

MURJD Lifemurjd
22:45 18 May 21
The service was immaculate. Staff was personable, competent & friendly.

stumpeng
20:00 11 May 21
I was interested in locating a good Asian market, was told about H Mart, and found not only a good market, but an... entire mall dedicated to assorted Asian foods, bubble teas, etc. Leaving there, was pleasantly surprised to find virtually every kind of Asian ethnicity available, for nearly 2 miles up Lincoln Highway!read more

s jean
00:59 14 Feb 21
A restaurant that doubles the pleasure of a quick and wonderful feast Chopang.

HY Tang
00:59 10 Jan 21
Went to H-Mart. Very crowded. Did not feel safe shopping around during the pandemic. Left after grabbing a few... essential items.read more

dru kapadia
20:51 26 Dec 20
Love the selection of fruits, veg and incredible sea food. And if your into korean cooking even better.

Eva Kuo
04:05 03 Dec 20
Love this plaza , there are good amount of Asian restaurants and bakeries , each of them all have very testy dishes...... Also a Korean Supermarket Hmart and a Spa here. Great plaza for getting Asian flaver !read more

Justin Kakuda
19:21 08 Sep 20
They have more than anyone could ask for. Forever love HMart.

Jimmy Jen
01:08 16 Aug 20
Most of the time I go to the Hmart and KFT (Kung Fu Tea - must try their milk bubble tea). Today I tried a new place in... this plaza - a Taiwanese chain store named MeetFresh - specialized in cold and hot smoothie, and mochi (rice dessert). For cold smoothie, I recommend Icy Taro Ball Signature. For hot, I recommend Red Bean Soup Signature. Each cost $7.95.read more

Cyril Wyche
19:04 14 Aug 20
H-Mart, the main anchor store, is the best Asian grocery store in the entire NY/NJ area. Several great novelty... restaurants are nearby, and the Korean Spa is a unique experience. It's not open right now because of the stinking virus lockdown, but when things open up again you should also try the Korean BBQ called Picnic Garden. It's a unique sort of a buffet where you select raw meat to be cooked at your table and a variety of Asian side dishes to go with it. It's a little pricy, but I love it.read more

Viktor Bek
02:38 25 May 20
Worth the trip, most of stores and restaurants still offer takeouts, all have masks available for purchase, H mart has... hand sanitizer available for costumers at the entrance, produce and specialty are all available.read more

Thai Pham
23:06 07 Mar 20
My fellow Asians may cause some parking issues, but I'm sure they have good intentions. As for a review on the entire... plaza - it does what it's supposed to do. Parking is sufficient. Handicap accessible. HMart has great fresh veggies and seafood. Some of the best in my opinion. The restaurants nearby are also great. Check out Spice 24. You will not be disappointed.read more

Queen Gabbi
00:57 16 Feb 20
This plaza has an abundance of shops that can satisfy any taste big or small and you can end a wonderful day of... shopping with Island Spa. A great amount of parking and you are welcomed to enjoy the peace and great prices. Enjoy!!read more

Jamie Irving
19:24 06 Oct 19
You already know we had the best time ever here...try to come back at least once a month

Robert Becker
12:31 01 Apr 19
We came here for HMart, the best place we know for fresh fish and Korean/Japanese products.We've also been to the Spa... on the side and loved it. I would recommend the experience to anyone who has never been to.The Paris Bakery is great too, and always has tasty things (remember to grab the tray and tongs when you enter)And we like visiting the little dollar dynasty to see what strange new things they have for sale.I would really recommend this plaza to anyone who doesn't usually visit any Asian markets. There is a great variety here that you won't get elsewhere And the plaza is still very accessable to those not familiar with Asian products.Also H Mart really is the best place for fish or lobster.read more 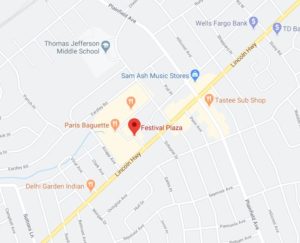